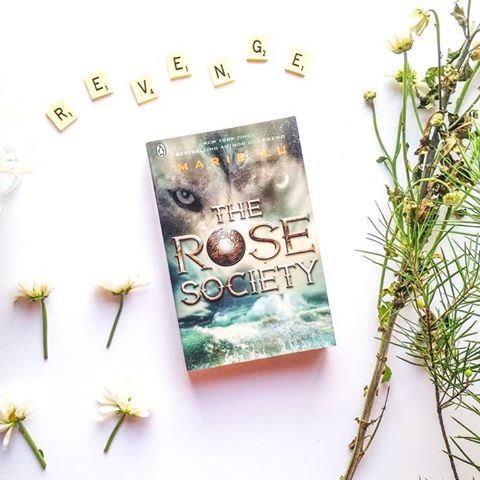 I have come to accept that Adelina is nothing more than a villain and it makes the series so much more satisfying to read. I just reread The Young Elites and it was alot easier to read once I accepted that she was and would be the villain in the tale and that her flawed reasoning what fuels her messed up journey. She could’ve been the good one, but she let her own insecurities dictate her decisions and becomes darker as a result.

The Rose Society was awesome. Adelina was cast out of the Daggers and she decided with the help of her sister, to find Elites and form a society of her own. She searched for Magiano, the famed magician on her first quest and found him. Together, they found other Elites and men willing to serve her cause promising to take the throne from the Queen and rule Kenettra.

I love and hate Adelina’s journey. Most of the time I was really on her side. After all, the Daggers were turning their country over to an enemy country by aligning with Beldain, even if they had good reason to. And I felt that betrayal. However, Adelina consistently let the way they judged her to fuel the darker portions of her character when she could use her powers to be slightly less awful. Whilst I enjoy the anti-hero and the villain, I suppose I dislike how often she flew off the handle and it continuously put her on a downward spiral instead of staying smart and staying ahead of the game. She was a cunning character that could have used the fear of others to fuel her power and then use that power to execute a plan and she just failed time and time again, then felt guilty for being so evil, and warred with herself over her harshness. I prefer characters like Magiano who clearly look out for themselves and would align with the wrong crowd in order to further himself but who consistently keeps a cool head.

Adelina reminds me of the Queen from Snow White, obsessed with being cast aside, ruled by her own, need to be worshipped, yet constantly doing things that would horrify even the most loyal subjects, which leads to them not being loyal, which fuels her insecurity and the cycle continues.

Still, I’m captivated by her story, eager to see if she will ever become something other than the villain or if she will die a lonely and terrible death after fully alienating those who love her,